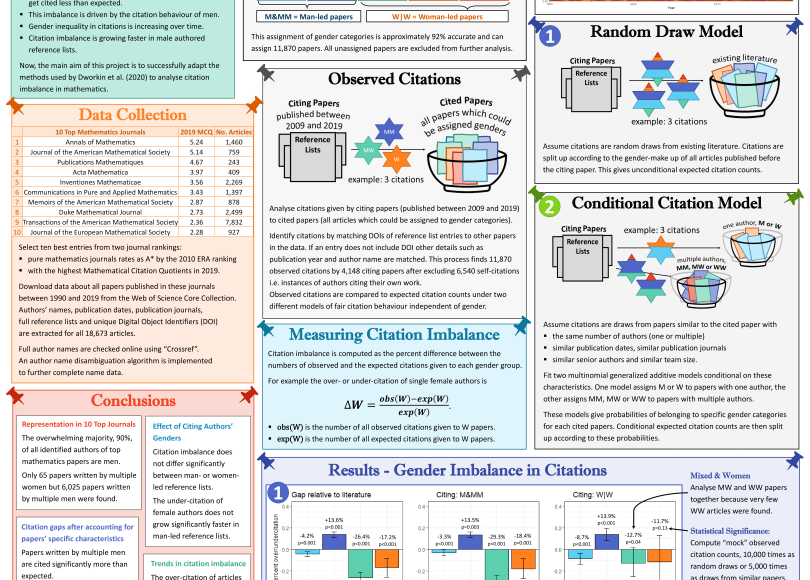 Thanks to a Google Scholar alert informing us of all new scientific articles using or citing NamSor name classification API, we’ve stumbled upon a beautiful dataviz showing the gender gap in Mathematics.

The gender gap in STEM subjects has been widely studied and
it is a known fact that women are under-represented in
mathematics, especially in the most reputable mathematics
journals. One aspect of this gender gap, which has not yet
been analysed specifically for mathematics is gender
imbalance in papers’ reference lists. Because citations are
often used to measure academic success, it is of great interest
to see if evidence of gender bias can be observed in the
citation behaviour of mathematicians.
Analysing gender imbalance in neuroscience reference lists a
recently published study by Dworkin et al. (2020) found that:
▪ Neuroscience articles written by female last or first authors
get cited less than expected.
▪ This imbalance is driven by the citation behaviour of men.
▪ Gender inequality in citations is increasing over time.
▪ Citation imbalance is growing faster in male authored
reference lists.
Now, the main aim of this project is to successfully adapt the
methods used by Dworkin et al. (2020) to analyse citation
imbalance in mathematics

Introduction to the infographics Gender Imbalance in Mathematics Citations Do female mathematicians get cited less than men? Undergraduate project by Katharina Limbeck supervised by Janine Illian

This undergraduate project by Katharina Limbeck supervised by Janine Illian uses NamSor gender guesser (among other tools) to infer the likely gender of authors in mathematics journals.

Here is a PDF version of the infographics (original link https://web.socem.plymouth.ac.uk/wim/posters/UG%2003%20-%20Katharina_Limbeck.pdf),

Here are some other interesting reads about women in STEM, and more specifically the gender gap in science:

Credits : illustration by Katharina Limbech All Rights Reserved ; Read this article in French, Russian or in Spanish.